Pew Research released a major rural vs urban study, and the headlines missed the best bits.

Pew Research’s new social trends study has shown up in a lot of news stories with widely varying headlines. Pew themselves titled it “Americans Are Less Likely Than Before COVID-19 To Want To Live in Cities, More Likely To Prefer Suburbs.”

There’s a lot more interesting rural conclusions to be drawn from this new data comparing people’s living preferences from 2018 to 2021. Most of the positive trends for rural places are being overlooked in the headlines. 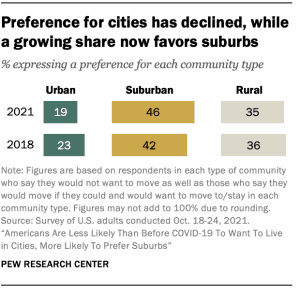 Right in the very first chart, there are several headline-worthy points that are worth noticing about where people would prefer to live.

More people prefer rural than urban, and the gap is increasing.

While 35% say they prefer rural, around 17% of the total US population lives in rural places. Allowing for differences in the definitions of rural, and the survey question’s exclusion of those with no preference, it seems likely that a lot more people prefer rural than live rural right now. This implies there’s pent up demand for rural living.

This aligns with previous studies of the number of people who would live rural if they had their choice. In 2018, Gallup asked people where they preferred to live, offering six different levels of urbanization to ruralization. Rural came out on top for all age groups, except for 18-29 year olds, where rural came in a surprising second out of the six choices. Trulia research in 2015 showed 7% more people wanted to live in rural places than did at the time.

From 2015 to 2018 to 2021 from three different research groups, that’s been a consistent finding: more people would prefer to live in rural places if they had a choice. 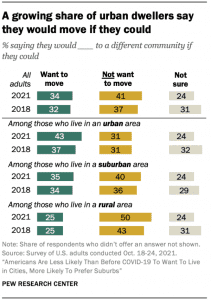 Only 25% of rural people who want to move say they would move to a different type of community if they could, compared to 35% of suburban and 43% of urban people. The percentage of urban people who said they wanted to move showed a big increase, from 37% in 2018 to 43% in 2021.

43% of suburbanites and 23% of urbanites who want to move said they would like to move to rural places.

The pandemic didn’t increase preference for rural living, but it did increase motivation.

Daily Yonder pointed out that the number who preferred rural areas didn’t increase with the pandemic, despite apparent increases in the number of people moving into rural communities. People didn’t have to suddenly develop a preference for rural places, because the preference was already there.

What the pandemic changed was some people’s motivation to move because of perceived risk and some people’s ability to move with the rapid adoption of remote work. That’s what changed the demand and sent some rural real estate prices higher.

You may know that we run the Survey of Rural Challenges every other year, and I’m very interested in what people say their challenges are. Here’s what Pew found about challenges.

Many more city people said the health and economic effects of the pandemic were major problems in their community than rural or suburban people. There was a 10 percentage point difference in each measure.

Urban and rural people are equally pessimistic about how long it will take to get back to normal, and suburban residents are a shade more optimistic there.

On most of the challenges the Pew survey listed, it appears that urban residents were more concerned about it than rural or suburban people.

Drug addiction was a major problem in their area for 49% of urban, but only 40% of rural, 29% of suburban people.

Despite the differences, these percentages show a LOT of people facing major challenges.

Rural people were more likely to say access to doctors and hospitals and high speed internet access were major problems in their communities.

On healthcare, 22% of rural people rated it a major problem, but only 20% or fewer for urban and suburban people.

For high speed internet, it was 26% of rural people calling it a major problem in their communities versus 20% or fewer for urban and suburban.

Rural to urban, we want the same things in a community

What people said they consider important in a community hasn’t changed much compared to 2018.

Most of the factors people wanted in their community scored similarly among rural, suburban and urban people.  We have these in common.

The number one ranked factor is a community that is a good place to raise children. Rural-favoring factors that showed an increase in support between 2018 and 2021 included a community with access to recreational and outdoor activities and a place with a strong sense of community.

This also aligns with what rural people said in a 2021 Montana Extension survey. They selected some of the most remote and challenged rural communities to go find and talk to a few newcomers in their town. New residents said they were pulled to their new community because they want to raise their kids like they were raised, to be closer to nature, to have a slower pace of life and a lower cost of living. Being part of a small community and friendly people were the top things they loved about their new towns. 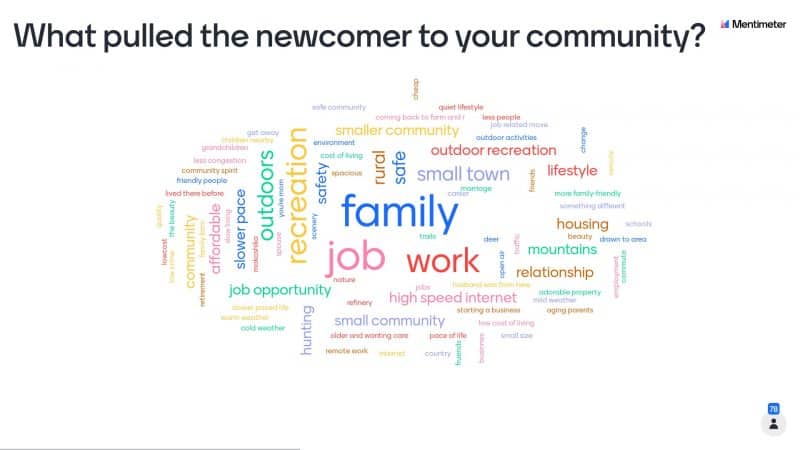 Overall, the Pew Research study brought out some positive points for rural places to consider and largely agreed with previous studies of rural preferences. Society may realign significantly as work is increasingly decoupled from place.

Read the whole study at Pew: Americans Are Less Likely Than Before COVID-19 To Want To Live in Cities, More Likely To Prefer Suburbs

I’d love to hear your thoughts in the comments or by email.