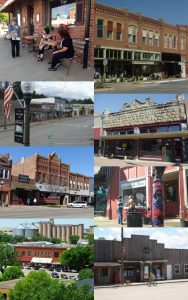 Let’s compare two small towns and how their retail outlets do business. Town A has a population of 3,700 and is on a steady decline shown by a loss of 15% since 2000, and Town B has 990 residents with a 27% increase during the past 16 years. Towns A and B both have an arts community, hard-working, diligent volunteers as well beautiful settings.

What makes one town soar and the other one falter? Two words—attitude and consistency.

Town A has several interesting and fun shops, but a person needs a calendar to know on which days of the week they are open, if they are open. Also needed is the patience to determine store hours; they change from day to day. Considering both towns are a draw to tourists, one would think the shopkeepers would adjust their hours during the season to take advantage of the opportunities, but they are just as lackadaisical as the rest of the year. These same merchants constantly complain about the lack of revenue.

This summer I’ve noticed the same thing as I have in previous summers when I drove through Town A at 8 am and again at 9 am: people are out walking and window shopping. With some stores opening at 10 or 11, or taking an entire day off during the week, the shopkeepers are missing more than the potential income, they are also advertising to the all comers that they don’t care about customers. Word of mouth is the most often used method of advertising and you can bet travelers tell others about both Town A and Town B. Guess which one gets more positive comments and business?

Town B’s shops are all open by at least 9:30, doors thrown wide to invite people in. During the tourism season they are also open on Sundays. The little town has crowds; it is difficult to find a parking space, whereas Town A has the appearance of the town that is open seemingly on a whim, whether locals or visitors like it or not. Parking places are available at any time.

To be fair, Town B is closer to Mt. Rushmore, a huge draw, than is Town A. Here is a news flash for Town A. Instead of complaining that the hordes are gone touring all day and how sad that you are not getting their business, how about opening by 8 am and staying open later, as a welcoming gesture?

As for consistency, I found that even when group reservations are made at a restaurant in Town A two weeks in advance, one cannot depend the restaurant will be open on that day, even when their large outdoor advertising sign says it is open daily. This happened to me this week; the day before the planned event I stopped to give a final head count and was told nicely, “I’m sorry, we are not going to be open tomorrow.”

At that point, attitude and consistency both were sadly lacking. Those are the main differences in Town A and Town B. Which town does yours emulate?

Peggy writes from the family farm in southwest South Dakota. Her internet latchstring is always out through peggy@peggysanders.com

(C) 2016 by Peggy Sanders. Used on SmallBizSurvival.com by permission.