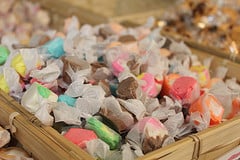 Share your sweet good news in the Brag Basket, and we’ll all cheer. Photo (CC) by Marilyn Acosta on Flickr.

The Brag Basket is open! This one is for October 9-11, 2015. Bring your sweet good news, big or small, to share with everyone.

What can you do in the Brag Basket?

Just don’t make it an ad. I delete the ads that people stick in here. If you talk more about the people involved than the things, you’ll be fine.

It’s a conversation with friends. So jump in. And remember to cheer for each other.