“Get back to the basics.” How many times have you heard that?

Sometimes the basics are the best place to start. In the late 1990’s under the helm of Executive Director Leo Presley, the Oklahoma Department of Commerce (ODOC) developed a model for community development that worked especially well for small towns and communities. It was the basics.

It was spread throughout Oklahoma by ODOC Regional Directors taking it to every community in their regions and speaking at any opportunity to spread these basic and easy to understand community development ideas.

They were called the “Building Blocks.” 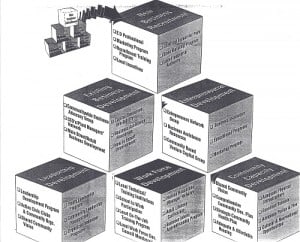 The ODOC Building Blocks represent a “back to basics” approach to stronger communities. Illustration provided by Laura Girty.

Six blocks pictured in a pyramid. The idea promoted that after a community self-assessed and performed strategic planning they should implement change and revitalization for their community by following the Building Blocks Model.

The first emphasis for development starts at the bottom level of blocks: Leadership Development, Work Force Development and Infrastructure Development. Once significant improvement at ground level is accomplished a community moves onto the second level: Existing Business Development and Entrepreneurial Development. And finally when a solid foundation has been secured the final level: Industry Recruitment.

The blocks were used for basic community training with a reminder that business recruitment (first on the minds of most Oklahoma towns at the time) actually comes LAST after a strong foundation in each of the other areas is built. This was a very new idea at the time. That a community should ensure that they had a quantity of quality workforce before they attempt to entice a new business to locate there. That a community needs to ensure that their water, sewer, roads and other infrastructure has the capacity to support a new business. These were very new ideas and not easily received.

But for the communities that determined to “get back to the basics” and started working the Building Blocks Model they quickly realized that they became stronger. Not only ready for a new business but more stable and capable of withstanding the loss of a major business or other crisis. Those communities that ‘worked’ the model grew strong with a strong foundation of essential community assets.