Let’s talk about the National Broadband Plan, and its 100 Squared initiative. The goal is to get 100 million households on 100 mpbs by 2020. All well and good.

The problem is the remaining 5.5 million households, almost assuredly rural. They are not included in the plan, and there is no “phase 2” or second plan or goal to get anything to those households above the “minimum” 4mbps goal. So the urban and suburban households get the 100 mpbs; the rural households get 4 mpbs. Should we really be happy with that 25x difference?

Right now, approximately 14 million US homes do not have access to high-speed Internet at all. Here’s a map of rural broadband availability in the south, created by Southern Business and Development based on data provided by the state economic development agencies. 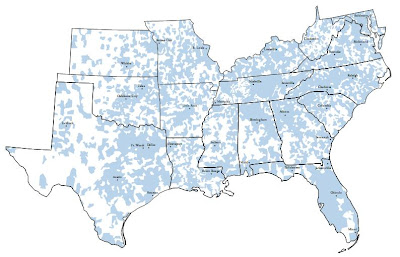 Also, pay attention to the debate over proposed changes to the USF, Universal Service Fund.

For an in depth look at rural broadband, from the perspective of an independent broadband provider, head to Daily Yonder for The Battle For Broadband.

“The best result for rural communities is to have locally-owned and operated broadband networks. The telephone and cable duopoly has a different vision of the future.”