Nate is a web designer. Allie is getting married. I’m helping an organization with their web presence. Trista arranges flowers. All these stories are linked. And all of them tell something about small business. 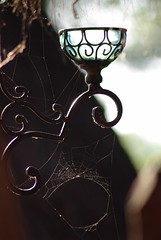 1. Nate Reussercame to tell me (and the staff of the organization) about passwords and their website. In the course of the conversation, two things became clear. First, as a designer, he gives clients what they ask for. Although he will suggest things, the client, ultimately, decides how a site looks. Second, he and his firm are capable of way more than they did for this client.

2. Later, Nancy, (my wife) was looking at Reusser Design’s client gallery. Among the clients, she noticed one with flowers. Wedding flowers. Gorgeous wedding flowers. Rose’s Bouquets.

Because the girl getting married is marrying our son, Nancy told Allie about Rose’s Bouquets. And mentioned to Nate that she was looking at Rose’s. Nate wrote back and said, “She’s great! In fact, we used her for our wedding flowers.”

Nate put the client samples on his website, yes, but he was also putting the clients on the site, giving them potential business, business that he believes in.

3. Allie went to the site for Rose’s Bouquets. She filled out the information request, and indicated that, although the wedding is not for a year, she will be living in another city starting in two weeks. As a result, Allie said, she’d like to meet soon for a consultation.

“Hi, this is Trista. I don’t want to be creepy, but I just now checked my email and wanted to follow up as soon as I could.”

Allie and Trista had a great conversation. She focuses on weddings. She works out of her home. She understands brides. She is completely local. They will be meeting this week.

—–
We know the web is a collection of links. But that’s just the technical definition. It’s actually a collection of people doing business the way it’s always been done, when it’s done well.

Jon has been a regular reader and occasional contributor around here since 2006. Jon works as a pastor, but he understands business better than many so-called business people. He gets that it is about people, relationships, service, and yes, even love.