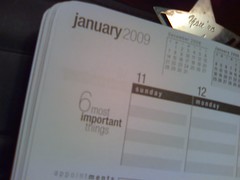 Every day, as you start work, you know exactly what you’ll work on first. And what comes after that, and what comes after that.
Not a vague sense of a looming to do list, but an exact knowledge of the few most important things to work on today, in order. It’s do-able.
When an interruption comes in, you know quickly whether to act on it immediately, delay it, or dismiss it.
How do you get there?
Today, at the end of the work day, last thing before you finish for the day, take out a small piece of paper. Write on it the six most important things to do tomorrow. Put them in order, with the most important first. Then, first thing in the morning when you start work, begin with number 1. Do not move on until it is finished. Then work on the second item.
When an interruption comes in, compare its importance to the items on the list. More important? Do it now. Less? Put it on your separate big project list, but not your six list. At the end of the day, last thing, take out a new piece of paper and write the six most important things to do tomorrow. It’s different from today’s list, because things change.
How to make this work right:

The Mary Kay organization believes in this enough that they make space for it at the top of their consultant date books.

Maybe you’ve heard the back story about the six list before, but I think it’s worth my re-telling it.

Back in the early 1900’s, Charles Schwab was the head of the Bethlehem Steel Corporation. Consultant Ivy Lee offered to increase the productivity of Schwab’s people, and Lee would let Schwab decide what the results were worth. Schwab agreed.

Lee taught each executive to sit down at the end of each day, and create a list. The list must contain only the six most important things to be completed the next day. Each morning, they should start the day by working on the first item on that list, and not move on until it is completed. That was it. Lee left, and let Schwab watch what happened.

If Charles Schwab found a simple list of six things to be worth half a million dollars, maybe it can work for you, too.