Most small towns missed out on the recent run up in the USA national economy. And when we were struck with repeated crop failures and a horrendous local economy, the rest of the nation certainly didn’t notice. So, how is the national financial crisis affecting small towns? Well, it’s a mixed bag. And it’s still evolving.

Let’s start with the view point of Jack Schultz. Jack is a legend in the small town economic development field. No one has a better feel for what is going on in small town economies. He also happens to be chairman of the board of one of his hometown banks in Effingham, Ill. At the start of this crisis, in his Sept 30 Agurban e-newsletter, Jack pointed out that small town banks are completely different from Wall Street investment banks, even though both are called simply “banks.” Jack also reported the results of an informal survey of small town bankers from across the USA. 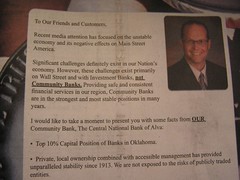 This year [at our customer appreciation event] I made it a point to ask every banker that I talked to (about 8 in all) if the current Wall Street crisis was affecting their lending to small businesses on Main Street. Only one of the eight said that they had tightened their loan underwriting “slightly”. The rest were all”business as usual.”

The photo here is an actual newspaper ad from our home-town Central National Bank of Alva, promoting their stability.

Not far away, The Woodward News quotes a couple of local bank presidents.

“This is a great time to be in Oklahoma,” he said and chuckled a bit. “The banks here and also in the Midwest in general, are well capitalized,” [Stock Exchange Bank President Bruce] Benbrook said. “ They have been sticking close to home, making good loans to the good people here and we are not in the condition that these other institutions are.”

Those opinions were mirrored by Central National Bank of Enid-Woodward Branch President, Steven Jones.
…
“Especially in the Midwest region, the banks are sound and well capitalized and most of that negative publicity is not going to affect these banks across this area.”

If you detect a note of smugness, there is good reason for it. The answer goes back to the 1980s farm crisis. Here’s how small town banker Bill Wyckoff explained it in the Wall Street Journal.

A community bank used to rely on participating loans with large metro banks. For example, if my bank had a regulatory loan limit of a million dollars and I made a two million dollar loan, I would “sell” the over-line to a large bank. These large banks suddenly suspended and called all rural credits. This is probably similar to what is happening to borrowers who use super-large banks in today’s panic environment. There was nothing wrong with these loans but every small bank suffered from this irrational wrath.

A group of fellow bankers formed an ad hoc loan-pooling arrangement and we traded loans. Not a dime was lost, no borrowers were sold out and we didn’t need a government bailout. It did instill a fierce sense of independence and self reliance.

Now the small town bankers are less than enthused about the bailout plan of today.

So if our banks are OK, our basic commodity prices aren’t. And that hits us where it hurts. The Woodward News quotes Dale Moore, a local cattle producer and feedlot owner-operator.

Moore said he believes the current stock market trend has trickled into the commodities market, such as cattle and wheat, partially because there are some traders in both the stock market and the commodity market and some of those same people are selling everything.

While our local economy may ignore national trends, changes in commodity prices will affect us directly.

While the news coverage has focused on the investment banks and individual homeowners, you might not realize that your state government is actually a huge investor in the stock market. Where do you think they keep the state retirement funds?

Here’s another report out of Oklahoma, from the Enid News and Eagle:

Meachamsaid state pension accounts alone face potential losses of $73.4million because of the failure of Lehman Brothers. He said the stockmarket’s tumble this week has increased the losses.

According to Meacham, instability in the country’s financial system is making itmore difficult to sell bonds needed to fund state projects, such as $300 million in road and bridge improvements.

“There are just no buyers out there for bonds; there’s no liquidity,” the treasurer said. He said the lack of financing will drive up the cost of selling the bonds.

Besides the state government, you have local foundation endowments, all manner of pension funds, and every private investor.

Local governments are getting caught in the tight credit market, too. The Woodward News reports that the City of Woodward (a client of mine), is paying higher interest on one new loan, and is having trouble accessing new credit.

“The initial source that we go to as communities for low interest loans for infrastructure can’t access any money-they are unable to provide any types of loans grants for funds to any community till a time unknown at this point,” Riffle said “So yes, we are being impacted in a lot of ways.”

“We are only getting this loan finalized on what they callreputation risk factor,” Riffel said. “It is a credit thing with them [Bank of America] now and lots of local governments are wanting money from Bank of America and not getting it.”

Clean up your personal finance

In case you didn’t realize, this should be a big wake-up call for cleaning up your personal financial issues.

But [Central National Bank of Enid-Woodward Branch President, Steven] Jones said this is indeed a time for Americans to take a look at their debt and use debt as the management tool, the way it was designed to be used, especially going into an uncertain national economy.

“Certainly the smaller the debt load the better,” Jones said. “Basically if you are making a lot of payments to me, you are not benefiting from your own money as much. They need to manage their debt and make sure it is not managing them.”

So what is the bottom line? Small towns are not taking the brunt of this blow. Our banks are sound. But we are far from immune, especially in our commodity-based economy. Besides the direct effects on our own investments, our charitable foundations are hurting and our state and local governments are stressed.