I knew where I was going in the big box office supplies store. I go there regularly, though not often enough that my face is known. When I got to the aisle I needed, I walked past two employees. 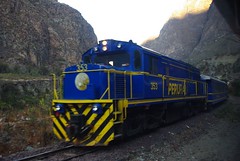 They were deep in conversation. I quickly figured out that one was probably in training. As I came within earshot, the trainee was explaining how he had rearranged a section of the stock on the shelf. The trainer explained how to handle the uncertainty of that process more effectively.

The trainer then said “Have you been offering tech services?”

I prepared to answer some questions, as I was staring at wireless routers with my back to the two men.

“I don’t even know how,” said the trainee.

“It’s easy. I’ll show you,” said the trainer, turning to a computer at the end of the aisle.

I picked up my router and walked to the front of the store, slightly stunned.

The trainer had been doing a wonderful job. He was clear, thoughtful, articulate. He handled the trainee well, asking exactly the right questions. He was great.

Except for the fact that a customer walked past him, stood 3 feet from him, and walked away without the trainer ever acknowledging the customer’s presence.

I’m hoping that someday, the trainee gets wild and rebellious, transcends everything he ever was taught, and smiles at me.

Jon has been a regular reader and occasional contributor around here since 2006. Jon works as a pastor, but he understands business better than many so-called business people. He gets that it is about people, relationships, service, and yes, even love.